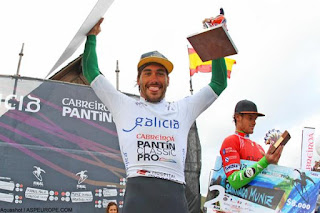 Aritz Aranburu (Zarautz, EUK), today claimed the ASP 5-Star Cabreiroa Pantin Classic Pro taking down Santiago Muniz (ARG), in a low scoring tactical final where wave selection proved crucial, 13.67 to 8.93, in tough wind affected 5-6ft waves. It turned into a battle of the fittest with the finalist having to surf four times during the day in a building swell at the main event site at Pantin.
Both finalists changed peak on various occasions positioning for the best waves during the 40-minute final with Aranburu gaining the advantage halfway through the matchup with a series of critical backhand turns to claim a solid 7.17 out of 10. His backup score on a short right was all that was needed to distance himself from Muniz and claim the victory.
“I am very happy right now. At the end of the final I was dead with no strength left in my arms but it is great right now. Everything went well in the Final for me even though it wasn’t like in the semis or the previous heats. It was a difficult day for waves and you had to paddle back to the peak many times so the last heat was really tough but it was worth it and I am stoked.”
Aranburu, who went ballistic in his semi-final against Glen Hall (IRL) with two savage rights to claim the highest combined heat total of the event, 16.84 out of 20, was able to maintain his rhythm in the final and assert his experience over his younger rival.
Muniz, younger brother of elite ASP World Tour member Alejo Muniz and surfing under the Argentinean flag, claimed his best career result with his runner-up finish. Muniz was on fire throughout the morning advancing through Round Five to then comfortably proceed through the man-on-man format to the final where he struggled to find any decent scoring rides.
Muniz, one of the best up-and-comers on the junior circuit, made it look easy in the heavy seas with clean flowing turns and variety of innovative manoeuvres to build modest totals however enough to beat his competitors. The explosive natural-footer now moves on the upcoming ASP World Junior event in Bali, Indonesia where he will take added confidence gained in Pantin.
Glen Hall (IRL), ran out of time to pull back a steam rolling Aranburu in his semi-final clash to finish equal 3rd in one of the most exciting clashes of the Cabreiroa Pantin Classic Pro. Trailing Aranburu the entire encounter by combination, Hall answered back with two massive backhand hacks to get back into the game with an 8.27 out of 10. Still requiring another score, a huge set pounded through the line-up of Pantin to deny Hall one last opportunity to close the gap.
Earlier in the day, Hall carefully chose his position in the line-up and was one of the few surfers able to master the tricky main peak against the headland at Pantin. The push of the tide helped improve conditions with the growing swell and allowed both surfers the possibility to put on a great show for the huge crowds watching the action.
Chris Friend (AUS), finished equal 3rd to claim his career best result on the ASP Star tour. After being one of the form surfers through the morning session with clean powerful turns, Friend was unable to get into his semi-final bout against Muniz, finding only one decent scoring ride due to his decision to select the main peak which failed to deliver him results.
Friend now moves on to the remainder of the 2011 season with a much higher ranking which he hopes to build on and thus enter the Top 90 to secure a position in the crucial ASP Prime events.
“It is definitely my best result on the Star tour and I hadn’t really had a result on the Europe leg so it is good to go home with a 3rd in the bag. This has given me confidence for the last few events through the back of the year. Hopefully it will give me a bit of a boost into some of the Prime events at the end of this year and the start of next year.”