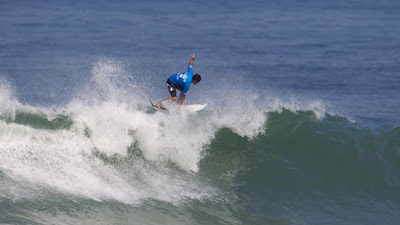 Much of the criticism online has specifically been aimed at de Souza's double-fist-in-the-air celebrations. The floater controversy aside, at least give the ASP judges enough credit that they are not swayed by the Brazilian's emotions any more than Joel Parkinson's famed claims. The ASP International Judging Panel has come forth and issued this statement on its website:
"Adriano's final wave was a lot bigger than what was shown online as the camera missed the bottom half of the wave -- this makes any subsequent analysis of the heat nearly impossible when utilizing only the Heats On Demand version. When De Souza lands you can see the size of the whitewash behind him and the amount of distance that he covered during the floater, how critical the section was and how difficult it would have been to land would not have been entirely visible on the webcast, and is not representation in the Heats On Demand."
The ASP also makes a "Full Disclosure" footnote, making it public that they are "looking into improving the current Heats On Demand product that the events currently provide." It goes on to critique the current formats.
However, there may be little the ASP can do about this. One of surfing's governing body's major faults is that they are really at the mercy of the sponsors in this case.The webcast and consequently, the Heats On Demand, are delivered to you by the company that sponsors each event. The companies all hire contractors to produce the event, but essentially when you watch the Gold Coast, you watch Quiksilver's broadcast, Bells Beach bought to you through Rip Curl's channels, and obviously the Rio event was via Billabong. The ASP has to deal with that issue before it can control particular angles of particular waves.
The international panel representative goes on to say:
"The part of the sandbar that De Souza executed the maneuver was waist-deep, hence the critical section. The waves on the final day were two-to-three-maneuver waves. The surfers could take the smaller ones that would run a bit further, but were a lot softer and easier waves to ride, or they could take the set waves which were a lot shorter but also a lot harder to ride. Owen's rides in the Quarterfinal heat were on the smaller waves that offered more room but less punch. During the final day, many single-turn waves received scores that would not normally be that high, but as the waves only allowed for two-to-three turns, we had adjusted the scale. It's important to note that there is nothing in the criteria that says surfers must complete multiple turns. We're in the business of surfers going big and that's what we've been seeing in the last 18 months.
The vision also fails to truly reflect the speed of the waves. The set waves flew down the bank while the smaller ones ran off a lot slower. The camera angle often failed to truly reflect the surfing being done at the time, as well as the depth of the wave, where the surfer took the wave in relation to the bank and how critical the sections are."
The judging panel seems to specifically be tailoring criteria to prepare for the new venues on tour this year. New York could have similarly short rides and one-move waves, a la Brazil. This may be why the ASP is being so thorough in its explanation. Obviously, the criticism must have come from some very credible sources. This kind of open communication is the only thing that is going to move the judging criteria forward. But there will always be detractors. They go on to describe the heat exchange in detail.
It wasn't so long ago that surf fans wanted to see high-risk manuevers scored higher than the old "three to the beach," format. Let's not forget that Bobby Martinez turned things around against Slater with a single backside air. Owen Wright's manuevers were certainly not a trio of average windshield-wipers into the sand, but if we want to see single, exciting moves rewarded, we might see some controversy along the way.
Published by csl~ en 9:43:00