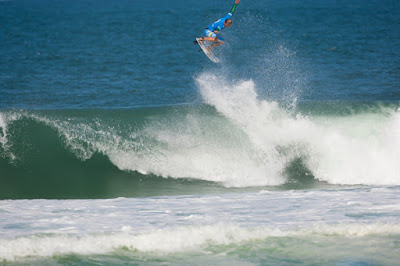 The Billabong Rio Pro returned to the beachbreak of Barra Da Tijuca after two days at the lefthander of Arpoador and saw massive upsets unfold among the event’s highest scores in punchy four foot waves while completing Rounds 3 and 4 of competition.
The Billabong Rio Pro not only plays a crucial role in surfers’ campaigns for the ASP World Title, but also offers important points for competitors out to requalify at the halfway mark in the season.
Bobby Martinez (USA), was responsible for the upset of the event when he defeated reigning 10-time ASP World Champion Kelly Slater (USA), in a close heat of 14.50 to 14.10. The talented Californian unveiled a lightning-quick forehand attack and impressive backhand aerial game in his hard-fought heat to take the Round 3 win.
Martinez, who is currently sitting at No. 55 on the men’s ASP World Ranking, knows that he is in need of results to try and improve his seed to remain on the elite ranks and hopes the victory over Slater will turn momentum in his favor.
Michel Bourez (PYF), went absolutely mental in his Round 3 match-up to eliminate defending event winner Jadson Andre (BRA), by belting a combination of furious backhand maneuvers to earn the second-highest single-wave score of the entire competition, a 9.70, and quickly followed up with a 9.40 (both out of 10). Both rides saw Bourez take the highest heat total of Billabong Rio Pro competition in his near-perfect performance of 19.10 out of 20.
Josh Kerr (AUS), was also responsible for an upset of his own when he lofted a big frontside air on a wedging righthander in the final minutes of his heat to eliminate Jordy Smith (ZAF), in Round 3.
Kerr later went on to advance directly through to the Quarterfinals by winning his Round 4 bout.
Joel Parkinson (AUS), continued his form after a standout performance in Round 2 and built momentum throughout the day to take his Round 3 heat and followed up with the highest single-wave score of the entire event, a 9.73 out of 10 to win his three-man Round 4 heat in the last seconds, advancing directly into the Quarterfinals.
Parkinson’s guaranteed 5th place result at the Billabong Rio Pro temporarily moves him to the No. 1 position on the ASP World Title Rankings after Slater’s early elimination, but the stylish natural-footer was cautious in place his new position as the new frontrunner for the ASP World Title.
Taj Burrow (AUS), was one top seed to prevail among the day’s upsets. The veteran campaigner not only took out his Round 3 victory, but also took a commanding win in Round 4 to ignite the day’s second-highest heat-total of a solid 18.40 out of 20.
Adriano de Souza (BRA), was also impressive in Round 3 today and continued to use the support of his passionate Brazilian fans to lift his performance.
De Souza will surf again in Round 5 of Billabong Rio Pro competition and can potentially overtake Parkinson for the No. 1 position on the ASP World Title race pending the final day’s results.
Event organizers will return to Barra Da Tijuca tomorrow morning at 7am to assess conditions for a possible start to Round 5. To watch the Billabong Rio Pro LIVE log on to http://www.billabongpro.com
Results and Videos...