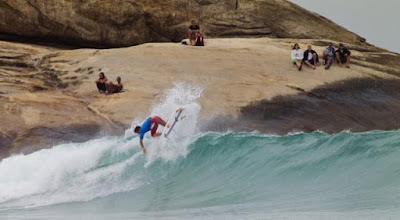 The Billabong Rio Pro returned to Arpoador for the second consecutive day and saw top talent including C.J. Hobgood (USA), and Joel Parkinson (AUS), earn the highest scores of Billabong Rio Pro Competition in clean two-to-four foot (1 metre) lefthanders to complete to Round 2.
The Billabong Rio Pro not only plays a vital role in deciding the 2011 ASP World Champion, but is also an important event for competitors looking to solidify their position among the elite ranks prior to the midyear cut.
C.J. Hobgood (USA), unleashed his powerful forehand repertoire on Aproador’s lefthanders in the opening minutes of his match-up against dangerous ASP World Tour rookie Julian Wilson while detonating the highest heat-total of the entire event, 16.50 out of 20. Hobgood’s impressive opening rides proved to be enough to take the win over the progressive Australian despite a late-heat press by Wilson.
Joel Parkinson (AUS), stuck to his strategy of waiting for the outside set waves and matched the day’s highest single-wave score of a 9 out of 10 for powerful backhand surfing to eventually eliminate fellow countryman Kai Otton (AUS).
Adriano de Souza (BRA), rebounded after a close Round 1 loss yesterday and went on an absolute rampage on his backhand in Round 2 to defeat wildcard Ricardo Santos (BRA), with one of the highest heat total of the event, 16.43 out of 20.
De Souza used his veteran status on the elite ASP World Tour ranks to calm the nerves that come along with competing in front of his fans, but the passionate Brazilian still admitted he has high expectations for himself at the Billabong Rio Pro.
Adam Melling (AUS), put in a deadly performance to eliminate Alejo Muniz (BRA), while matching the highest single-wave score of the event of a 9 and expressed the importance of each heat win with the midyear cut rapidly approaching.
Michel Bourez (PYF), got the best of a hard-fought battle against Arpoador local and event wildcard Simao Romao (BRA). After several wave-for-wave exchanges, Bourez notched a 6.00 on his last ride in the remaining minutes of the heat to overtake the Brazilian talent to earn the Round 2 victory.
Jordy Smith (ZAF), looked uncharacteristically sluggish in his Round 2 heat against event wildcard Peterson Crisanto (BRA), but found the scores needed to keep his Billabong Rio Pro campaign alive.
The Billabong Rio Pro will return to Barra da Tijuca tomorrow morning for a 7am call for a potential 7:30am start for Round 3. To watch the event LIVE in  http://www.billabongpro.com
Results and Videos...