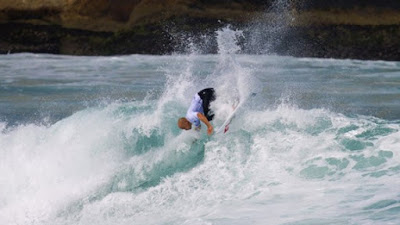 After a week of lay-days, the world’s best surfers tore into consistently changing conditions at the lefthand pointbreak of Arpoador to complete Round 1 of the Billabong Rio Pro.
Kelly Slater (USA), reigning 10-time ASP World Champion, got off to a strong start to open his Billabong Rio Pro campaign. Slater unleashed two furious tail-drifting backhand turns to notch the day’s highest single-wave score of a 9.00 (out of 10) midway through his bout to overtake ASP World Tour rookie Julian Wilson (AUS), and event wildcard Peterson Crisanto (BRA), after nearly missing the start of his heat.
Slater, who finished runner-up at the Billabong Pro last year, was also quick to admit that several goofy-footers will be tough to beat at the lefthander of Arpoador and noted that the natural-footers will need to be especially selective in their wave choice at the Billabong Rio Pro.
Taj Burrow (AUS), opened his Billabong Rio Pro campaign with a sharp backhand attack by belting two Arpoador lefthanders to the tune of a 16.83 (out of 20) on his first two waves to earn the highest heat-total of the day. The Australian veteran notched his Round 1 heat win over dangerous Brazilian rookie Alejo Muniz (BRA), and event wildcard Ricardo Santos (BRA).
Jadson Andre, defending event winner, reveled in Arpoador’s lefthanders with a combination of aggressive carves and snaps to take a convincing Round 1 heat victory with the support of the Brazilian crowd behind him.
Mick Fanning (AUS), two-time ASP World Champion, slowly built momentum in his opening Billabong Rio Pro heat, eventually igniting two lefthanders by combining a series of seamless backhand turns to notch a 15.07 heat total and advance directly through to Round 3.
The Australian talent also expressed the importance of advancing directly through to Round 3 with Brazil’s ever-changing conditions.
Billabong Rio Pro event organizers will reconvene at Aproador at 7am local time tomorrow morning for a possible 8am start.
To watch the Billabong Rio Pro LIVE in http://www.billabongpro.com
Results and Videos...