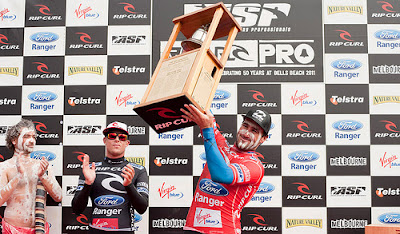 Parkinson grabbed the first wave of the final. He was sitting just a little deeper than Fanning and took the opportunity to draw first blood. An 8.53-point ride was the result. Fanning took the next wave. In virtually every previous heat he'd nailed a score in the high 8's or low 9's, but his first wave was an uncharacteristic 5.33. Watching that wave felt like Parko already had one hand on his third Bells trophy.
As the final progressed the crowd felt the same way. The buzz was behind Parkinson, but as he said later, he was never comfortable.The final chapter in the 50th Anniversary of the Rip Curl Pro at Bells Beach contest has been written and winner Joel Parkinson rang the bell trophy so hard and long, he broke the rope right off.

Parkinson laughed later, "It's such an awesome feeling ringing that Bell, I just wanted to keep ringing it, but I broke the rope right off. I put it back on but I had to stop ringing it. I'll give a few rings later tonight."
Parkinson and his good mate Mick Fanning have been the in-form surfers of the contest and it seemed only fitting that they had come from opposite sides of the draw to meet in the final. Parkinson handled Adriano de Souza, who was rolling with the momentum of beating No. 1's Kelly Slater in his semi. Fanning had a closer match with Jordy Smith. The pair came down onto the beach together and made the long walk side by side under Bells' sandstone cliffs to the paddle out spot.
The crowds were all standing due to the huge Easter full moon tides that had been washing up to the cliff's edge, leaving no beach on previous days. The anticipation of who was surfing in the final, the magical six-to-ten-foot waves pouring through the line up, plus AC/DC's "Hells Bells" pounding sent shivers down everyone's spines.
As it turned out, Parko's last wave left no doubt. With priority, he had to take the wave to keep Fanning off and as the horn sounded, he was pulling into a quick Bells tube. While he didn't know what the wave had scored he felt it was a good one. The five judges could have all given it the perfect score and if they had, the last wave ridden for the 50th would have added up to 50 points. But there was one spoilsport judge who only gave the wave a 9.5.
Results and videos...
FINAL RESULTS:
1 -- Joel Parkinson (AUS) 18.53
2 -- Mick Fanning (AUS) 13.26
SEMIFINAL RESULTS:
SF 1: Joel Parkinson (AUS) 16.33 def. Adriano de Souza (BRA) 12.00
SF 2: Mick Fanning (AUS) 18.87 def. Jordy Smith (ZAF) 17.23
QUARTERFINAL RESULTS:
QF 1: Joel Parkinson (AUS) 16.66 def. Owen Wright (AUS) 13.16
QF 2: Adriano de Souza (BRA) 18.00 def. Kelly Slater (USA) 11.24
QF 3: Jordy Smith (ZAF) 14.16 def. Chris Davidson (AUS) 11.10
QF 4: Mick Fanning (AUS) 17.46 def. Jadson Andre (BRA) 14.03
ROUND 5 RESULTS:
Heat 1: Owen Wright (AUS) 14.17 def. Bede Durbidge (AUS) 9.26
Heat 2: Adriano de Souza (BRA) 13.97 def. C.J. Hobgood (USA) 13.66
Heat 3: Chris Davidson (AUS) 16.03 def. Michel Bourez (PYF) 15.37
Heat 4: Jadson Andre (BRA) 14.37 def. Tiago Pires (PRT) 13.93