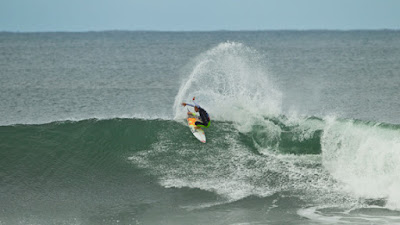 Round four of the men's event ran yesterday. Surfers call it the "Dane" round because it allows for very progressive surfing without fear of total elimination, ala Dane Reynolds. But the commentators on the beach were calling it the "Power Round," and it was the perfect description.
Each of the twelve surfers left in the event threw down big power moves, and none more so than Mick Fanning, who put together a two-wave score of 19.10 points out of 20. Three judges even gave him tens when he punched a four-foot hole in the top of a Bells lip that had the whole beach oohing and aahing. He emerged from the water to a crowd of fans clapping.
Results and videos....