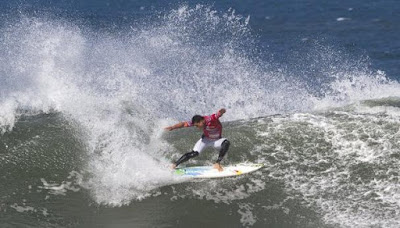 The first glimpse of Bells Beach is across farmland, where cows and packs of kangaroos remind you you're in the country and this is a protected surfing reserve. For the past three days, this view has included lines of waves stacked up against off-shore winds, leading the best surfers in the world to press the accelerator.
Owen Wright, Adriano de Souza, and Joel Parkinson all carried that speed into the first three heats and claimed victory.
The waves in Parkinson's heat, against Jeremy Flores, were close to perfect, but it was clear that Flores is still struggling with the knee injury that took him out of the Quik Pro last month. When the waves began to pulse halfway through the heat, it was Parkinson who capitalized.
Parkinson could have been describing what was going to happen three heats later when Kelly Slater defeated the last remaining wildcard Stu Kennedy with a two-wave total of 11.34 points. Slater was counting a three point and a seven point waves.
Parkinson had actually racked up the highest heat score of the whole event with a combined two-wave total of 18.13 points out of 20.
While that says plenty about Parko's surfing, it also says something about the conditions. They went from near-perfect to deteriorating as the wind swung to on-shore southwest, making wave selection a challenge.
"You had to be patient," said CJ Hobgood, clearly satisfied after defeating Matt Wilkinson, "But it's been a long time coming."
Unfortunately, his brother Damien struggled against Portugal's Tiago Pires. There is a saying around these parts that if you don't like the weather just wait a few minutes. Today was no different but it didn't get back to this morning's chilly, clean off-shore six-foot conditions.
The good news is that the swell is sticking around and according to the official forecaster we could be in for 'surprise' on Easter Sunday.
Results and Videos....