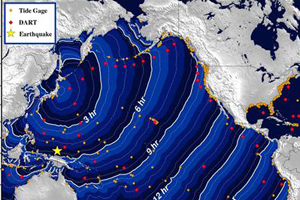 Hawaii is tired and groggy this Aloha Friday after being on tsunami watch all night. Residents near the shoreline were evacuated to higher ground. Tourists were evacuated to the third floor or higher in their hotels. Lines at the gas pump were a dozen or more long after the emergency sirens started going off at 10 p.m. Thursday night. Those expecting the worst packed the grocery stores, stocking up on water, non-perishable food items, batteries and toilet paper. AT&T cell phones were conveniently not in service as members of the network tried to call loved ones and friends all at once. Apple iPhone users kept in contact via social networks and the occasional text.
After the devastating 8.9 earthquake that rocked northern Japan yesterday, the entire Pacific braced for the worst. Initial reports indicated that the tsunami would reach Hawaii at 2:59 a.m. Friday morning and was forecast to be 12 feet. It didn't come in that size, but something came. Although there were no major damage reported so far, harbor areas, like Haleiwa, Kahului on Maui and Kona on Hawaii Island, are reporting damage this morning.
Published by csl~ en 12:04:00