Jeremy Flores out of Quik Pro with knee injury 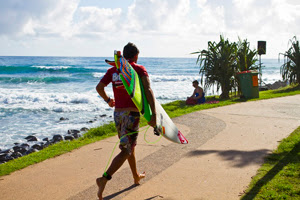 Reigning Pipe Masters champion, Jeremy Flores, has withdrawn from the Quiksilver Pro Gold Coast with a suspected MCL tear in his right knee, said ASP medical officer Saul Geffen. He is currently at the John Flynn Hospital in Coolangatta awaiting a definitive diagnosis.
The injury caps off an embattled week for the Reunion Islander that saw him ejected from the Burleigh Breaker Pro for his involvement in a physical altercation with a local surfer.
After the ASP declined to take disciplinary response to the incident, it looked like things were on the up and up for Flores, but that all changed during a practice session at the Super Bank yesterday evening.
The break was looking more like the "Good-to-fair" Bank yesterday as roughly 75 surfers including world tour pros Kelly Slater, Jordy Smith, Jadson Andre, and Kieren Perrow jostled and maneuvered in an effort to snatch set waves from behind the rocks. A little past 6:00 p.m. Flores snuck into a mid-sized wave directly off the rocks and rode it through to the Little Marley section. It remains unclear how he actually injured his knee. He emerged from the water walking, but unable to put weight on it and calling for ice.
Although he has not officially commented on the injury, Flores posted the following on his Twitter page this morning: "I'm out of the event :( ...Hurt my knee yesterday afternoon in a freesurf..MCL !!! i cannot believe it"
For the time being, the Quiksilver Trials runner up Marc Lacomare will surf in his stead, but Geffen says it is still too early to make any predictions about whether or not he will heal in time to surf at Bells.
"Obviously he's a highly trained athlete and his second question was: 'Well, I've got another competition in seven weeks time, will I be alright for that?'" Geffen said, "At this stage, we don't want to get too far ahead of ourselves, we need the scans and see how he responds to treatment."
Published by csl~ en 12:22:00