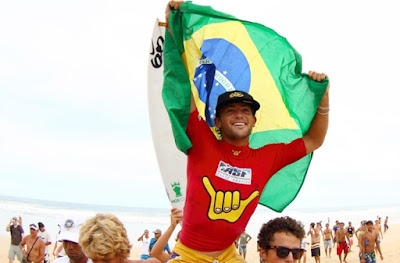 Brazilian Alejo Muniz, 20, has won the Association of Surfing Professionals (ASP) PRIME Hang Loose Pro Contest in three-to-five foot surf at the Cacimba do Padre, Fernando de Noronha, island, located at 345 kilometers from the Brazil’s northeastern coast.
Alejo Muniz earned US$ 40,000 in prize money and 6,500 points towards his ASP World Ranking. The runner up Dion Atkinson (Australia), 24, scored 7.14 points in the final, well under Alejo Muniz who won the event with an impressive combined two-wave heat tally of 13.00 points (both scores out of a possible 20).
For Muniz his first ASP PRIME event Title is also pretty much like a birthday gift, as he is turning 21 next Tuesday.
“Winning is the best feeling of all”, said Alejo Muniz, as soon as he got to the podium over his mates shoulders. “This is Brazil’s biggest event. Last year I got so close (I was defeated in the semifinal), but now everything worked my way this time, and it’s awesome to start the year like this. Winning here in Fernando de Noronha is fantastic.”
Next Monday Alejo will be flying to Australia where he makes his debut on the ASP Dream Tour. He is now one of five Brazilians in the elite group of the 34 best surfers in the world.
“I’m a little nervous for this next event. I tried not to bring this nervousness to Noronha, and I really have to say thanks to everyone who supports me, all my friends here and special thanks to my family which is 100 percent committed to my career as a Pro Surfer.”
To get into the final the Australian, Atkinson first defeated South Africa’s Shaun Joubert in a very close heat where he scored a total of 10.44 over Joubert’s 10.06. Then he faced Brazilian Heitor Alves, and once again Dion Atkinson won by a slight margin, posting a total heat of 10.73 to Alves’ 9.17.
“I’m very happy with the result. Alejo (Muniz) got all the best waves in the final, also he fired the whole contest showing very mature surfing, so he deserved this win”, said Dion Atkinson. “I really would like to win, but anyway it was good to make the final in this beautiful place. Few events are held in such hollow waves. It’s one of my favorite events in the world and I’ll still come back here in the coming years to try to win this event.”
The Hang Loose Pro Contest has completed its 25th anniversary and Alfio Lagnado, owner of the company and the father of the idea of running the first ASP event in Brazil, also sponsored by a Brazilian Clothing company gave the trophy to the Champion, Alejo Muniz. Alfio talked about the first Hang Loose Pro Contest in 1986 at Praia da Joaquina in Florianopolis.
“We were young dreamers by then and had the opportunity to bring tan ASP event to Brazil, so we didn’t think twice and took the chance to make it,” said Alfio Lagnado. “It turned out to be so nice that we continued running it for the last 25 years. Most athletes competing here were not even born. Surfing in Brazil has grown a lot compared to those days, with so many wins with the Brazilian surfers competing as equals with the best surfers in the world.”
He also talked on the new Hang Loose Pro Contest champion, Alejo Muniz.
“I’m very excited to give this trophy to this young surfer here, who was one of my team surfers until two months ago. It’s a kid we know and took care of since he was a kid, really a very good boy. I hope he has all the success in his professional career, congratulations”, concluded Alfio Lagnado.
Hang Loose Pro Final Result:
1 - Alejo Muniz (BRA) 13.00 points
2 - Dion Atkinson (AUS) 7.14 points
Hang Loose Pro Semifinals Results:
SF 1: Alejo Muniz (BRA) 12.77 def. Travis Logie (ZAF) 12.26
SF 2: Dion Atkinson (AUS) 10.73 def. Heitor Alves (BRA) 9.17
Hang Loose Pro Quarterfinals Results:
QF 1: Alejo Muniz (BRA) 10.10 def. Masotashi Ohno (JPN) 5.83
QF 2: Travis Logie (ZAF) 13.67 def.  Jihad Kohdr (BRA)