Kelly Slater now ranks right up there with the woman with the world's longest fingernails, the fattest twins to ever ride tandem on a moped, and the redneck with the longest mullet. It would appear that winning his tenth world title was more than just an ASP record, as the ever-inquisitive people at the Guinness Book of World Records took note and recently gave him his place in history.
"The most career wins of the male Association of Surfing Professionals world title is 10 by Kelly Slater," reads the good book's phrasing.
"As a kid reading the Guinness Book of World Records I never thought I'd actually be in it," confesses Slater. "I used to dream of something I could do that nobody else had either thought of or could do. It's pretty cool to have found that. Whether it lasts for a short or long time, I can always say I was in there! Pretty cool."
My guess is that his record's going to stand for some time. And just think, should Slater opt out of a competitive life forever more, a whole new world of record-setting has just opened up to him. Personally, I'd like to see him attempt the records for either the "fastest motorcycle handlebar wheelie," or "longest distance on a unicycle in 24 hours." 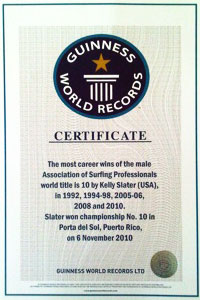