Freestone and the Frenchman 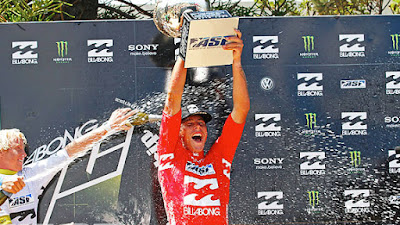 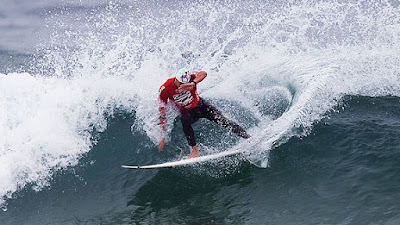 Marc Lacomare Billabong Asp World Championships
If 20-year-old Frenchman Marc Lacomare has proven anything with his victory at the Billabong World Pro Junior Championships in North Narrabeen, Aust., it's that he is a man of supreme confidence. Not once throughout this whole ordeal did he ever looked rattled. And when countrywoman Alizee Arnaud won the women's world junior title earlier in the week, it gave him even more reason to push forward. And how else would you explain his ability to win on such a big stage while looking so ridiculous?
While true the French are know for their astute fashion sense, Lacomare took it too another level when he obliterated the competition wearing a swim cap in every heat, and bearing an uncanny resemblance to Michael Phelps. Actually, Lacomare's damaged dome had to be sewed up several days prior and the latex top helped keep the stitches dry. Head wounds aside, Lacomare never bobbled, never looked "out of it" in a heat, he's a big, strong surfer bound for some kind of Jeremy Flores-inspired glory in the coming years.
"It's been a great event for me," Lacomare said afterwards. "It was a great trip to Australia and thanks to the locals too for sharing their break."
But Lacomare wasn't the only one standing tall on the podium. 18-year-old Aussie Jack Freestone won the overall ASP World Junior Title. After winning the first leg of the "tour" in Bali this past October, Freestone was the points leader going into Narrabeen, and while he finished a disappointing ninth, it was enough to put him over the top.
For the Americans, Santa Cruz-bred Nat Young made it all the way to the final, where an obviously in-form Lacomare had the pedal pinned. In the semis Young had barely slipped past an energized Mitch Crews when he bagged a last-second wave to carry him on. After the horn blew a distraught Crews was left in the lineup punching his board and wondering where he went wrong. And in Round 4 Young was the beneficiary of an interference call that allowed him to advance. That's not to take anything away from him, you do what you have to do, but from the early onset of the final it was obvious he just didn't seem to have that I'm-wearing-a-swim-cap-and-I'm-going-to-destroy-you kind of mojo about him.